In the Middle Ages a synagogue was located in the "Judengasse" (now "Am Stockhaus"), probably at the site of the synagogue that stood there until its destruction during Kristallnacht on November 9-10, 1938. It was referred to as the "Jewish school" in 1423 and 1508/09. In all likelyhood there was a synagogue there before the persecution of Fulda's Jewish community during the time of the plague.

Only a few decades after the inauguration of the synagogue, the synagogue had become too small due to the further increase in the number of Jewish community members in the city. Plans were made to build a new synagogue, for which land could be bought for 40,000 Marks during the summer of 1914. The First World War, and the subsequent period of inflation, however, prevented these plans from proceeding. 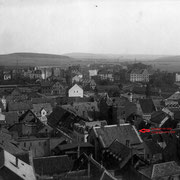 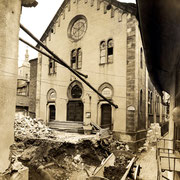 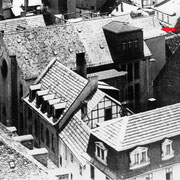 After the inauguration of the extended synagogue in 1927, the Synagogue was the center of Jewish life in the city for only another eleven years.

During Kristallnacht, on the morning of the 10th of November 1938, the synagogue was burnt down under the guidance of the SS commandant, Otto Grüner, and his collaborators. The fire brigade was present and had to limit itself to the protection of the surrounding residential buildings. At the end of January 1939 the demolition of the fire ruins began, with the costs imposed on the Jewish community. Since that time, there is an empty lot, where the synagogue once stood.

Today this lot is surrounded by a memorial naming the Jewish citizens who were deported from Fulda. A plaque, commemorating the place of the Synagogue has been erected on an adjacent building which had housed a Jewish religious school (Yeshiva) and a ritual bath (mikye). 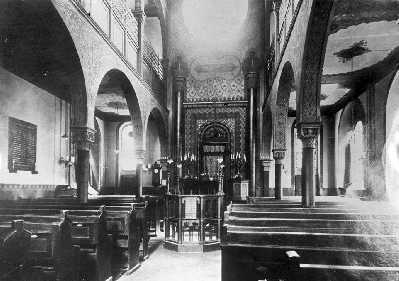